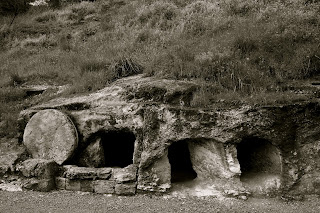 
MARK 16
2 And very early on the first day of the week, when the sun had risen, they went to the tomb. 3 They had been saying to one another, “Who will roll away the stone for us from the entrance to the tomb?” 4 When they looked up, they saw that the stone, which was very large, had already been rolled back. 5 As they entered the tomb, they saw a young man, dressed in a white robe, sitting on the right side; and they were alarmed. 6 But he said to them, “Do not be alarmed; you are looking for Jesus of Nazareth, who was crucified. He has been raised; he is not here. Look, there is the place they laid him.


Ahhh, the empty tomb, possibly the greatest metaphor of the New Testament. Victory over death on the "first day of the week", a reference to the Genesis creation story (so, Mark's story is a metaphor for Gen 1).


Is there an interpretation of the empty tomb apart from Jesus literally walking out under his own power? We sometimes hear of the theory that the body was simply stolen by zealous followers, but that seems like the work of a weak movement that would not have stood the test of time. Rather than getting hung up on trying to figure out what happened after Jesus died, let's concentrate on how Jesus lived.


If Jesus walked out of the tomb, what does the promise of everlasting life mean for the rest of us? Supernatural interpretations suggest Jesus will return in glory (the "second coming"), out of the clouds with God's trumpet, and that's when we'll rise from our graves (a wording that causes many denominations to prohibit cremation). But the New Testament is about the resurrection of Jesus, right then and there. What do the rest of us get now, and what do we have to wait for? I look for the metaphor (in this and most Bible stories), for one such as I who will not literally walk from his tomb to meet with survivors.


A large stone is rolled away and an angelic figure appears with an announcement. These are metaphors for exposing some hidden knowledge, such as the very understanding of resurrection. Mary (the mother of Jesus) gets her "annunciation" from an angel. The disciples on the mountain get knowledge from a glorious voice. Here in Mark, the scared disciples who just lost their leader see an angel. But none of us have ever seen an angel. (No, we haven't.) It's a metaphor. The story is trying to teach us something, not just tell a story.


Jesus died, but he lived a life that allowed his connection to his followers to remain. They realize they should not look for Jesus in the cemetery; they should live as Jesus taught them.


The connection to Jesus was so strong the followers were able to pass on that connection to others, and so on, leading all the way to today's Christians. It took a short while (three days, a symbolic passage of time used in other stories) for his followers to "get it". Live a life that allows your connections (and they are divine connections) to survive you.


The NT goes on to predict the second coming after which "there will be no more death or mourning or crying or pain" (Rev 21:4). Yes, the tomb is empty and death is conquered, but this story can be used in our daily lives. We will all lose loved ones, but don't look to their tombs for solace or wisdom. Look for the connection that remains of your lives together.
Posted by GaryGo at 11:17 PM

GaryGo
One wife, two sons (an auto tech and an attorney), two cats, two guitars. I have lived near Fairport, NY since 1984. I grew up in Liverpool, NY. BS in CS from RIT.